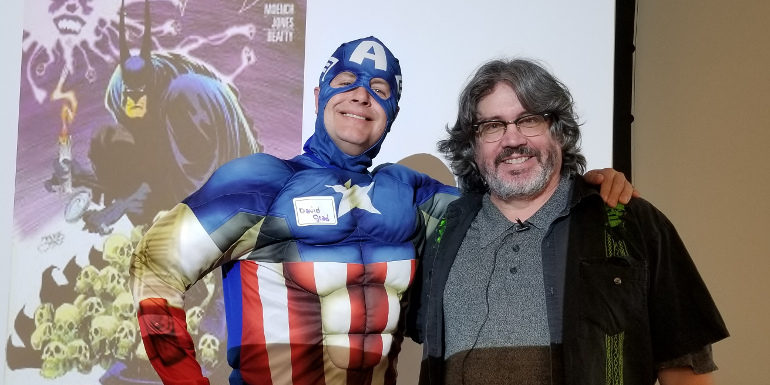 Some people fear death. Some fear public speaking. For groundbreaking comic book artist Kelley Jones, his greatest fear is boredom. He spoke at a lunchtime session I attended on Halloween, an appropriate day given the creepy characters he has brought to life in such a radical new way. The Sandman, Swamp Thing and even Batman have all been re-imagined on his drawing board.

I wondered how he was able to make such dramatic stylistic changes to characters that were cash cows for major comics publishers. Editors can be tough when they are protecting a legacy that has entertained millions of fans for decades. In other words, don’t mess with Batman… too much.

I asked Kelley, “We’ve all had bosses who were resistant to change and refused to entertain our new ideas. What advice do you have for breaking through that barrier?”

He said “Start with something low risk to prove yourself.  I made Deadman, a minor character at best, into a hit by making him actually look… dead. The company had nothing much to lose by hiring me. They were really only doing the book to keep the copyright. After the fans liked it and voted with their dollars, I was then able to take on bigger properties with more clout.”

It reminded me of all the times I’ve suggested “pilot programs” in the tech industry where I worked, because management would always get a little nervous if I wanted to mess too much with the previous way of doing things. The word “pilot” sounds temporary and low-risk. After all it’s just a “test,” right?

Kelley added another great bit of advice. “Don’t show too much of your work in progress. Get it into almost final form before management gets to review. They are typically not able to see your vision through the lens of doing things the way they’ve always been done.”

So, what about you? Are you an agent of disruption or a safe player? Maybe it’s time to push that new idea again. Start with a smaller chunk and prove yourself. Then immediately ask for more while you’re basking in success. You could invent the next big thing… or at the very least, beat back boredom.