The secret to harmonious teamwork 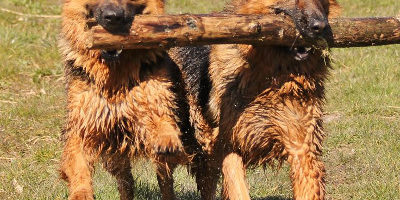 Why do personal conflicts escalate so quickly with non-profit volunteers?  Why do factions form like tribal alliances on Survivor?  What’s the secret to harmonious teamwork?

I was asked to facilitate a mid-year review and planning meeting for a group of 15 active volunteers who rescue German Shepherds in Northern California. As each person introduced themselves along with a short success story, one thing became very clear: they are ALL extremely passionate about saving dogs.

Like any volunteer organization, they have occasional miscommunications and disagreements, a minority of the people doing the majority of the work, and shared responsibilities that often have fuzzy lines of definition.  Yet as each one of them spoke, it was so clear that the one mission… the one shared value of saving dogs… was far more important than any petty squabbles over how it got done.

As the leader of that meeting, my goal was to make sure everyone was heard and respected for their opinion and they were. By the end of the meeting, we came away with renewed enthusiasm and agreement on a harmonious action plan to save more dogs.

Afterwards, I couldn’t help thinking about the state of our country. Harmonious teamwork is at an all-time low.  Leaders deserve some blame but it’s easy to blame the leaders. Heck, I could have just blamed the rescue organization president for failings of individuals and the process, but that would have been a very short and unproductive meeting, right?

I know the country is more complicated than a dog rescue group, and there are many more values than just one.  But come on, can’t we agree on SOME values that everyone can rally around?  Democrats and Republicans both want national security, a robust economy, community safety, the right to liberty and the pursuit of happiness. <Insert your priority here.>

No single political party has a monopoly on shared values. These are American values that everyone can rally around. What I see now is a whole bunch of people who care a whole lot about the country… but are not being heard and respected by the other “volunteers.” We are blaming and labeling instead of listening and respecting.

Don’t get me wrong. I’m NOT talking about cozying up to extremists from the far right or the far left. Fascists and anarchists get way too much air time as it is. I’m talking to you, the vast majority of citizens who are capable of reasoned thought and compromise.

Some of those who read this will already have their defensive comment ready to cut and paste.  Some will maybe stop and think for a moment, but eventually retreat to the safety of their chosen tribe. Some of you will actually take the risk to reach across the chasm and have a real conversation with your “opponent” about a shared value and then figure out how to move forward to make things better.

You may dismiss me as a pie in the sky optimist. Yeah… you may say I’m a dreamer, but I’m not the only one. The secret to harmonious teamwork is NOT to divide the team. The secret is to listen with respect and work together.