At the limit of your strength, fight on 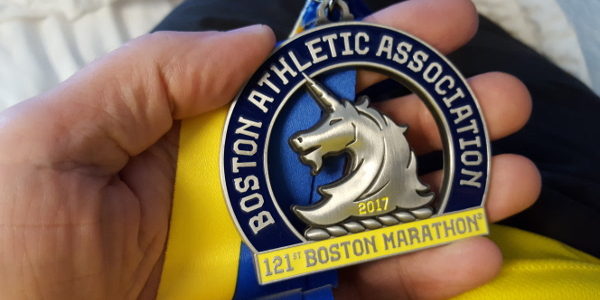 We saw warning signs at mile seven. Jeff was already beginning to feel tightness in his legs. Due to ongoing chemo treatments, he was only able to do up to a 15-mile run in his training. Brad and I looked at each other and realized it was going to be a long day for Jeff. Our mission was to help him get to the Boston Marathon finish line.

Thanks to Jeff, Brad, Ramona, family and friends, we had raised over $38,000 for the Multiple Myeloma Research Foundation. This further fueled Jeff’s determination to finish this dream race.  But honestly, I wasn’t sure how we were going to pull this one off.

The mother of all marathons was an amazing event. We took in the sights and sounds of the friendly people in the tiny towns. We talked to Doug Flutie, who was running for his Autism foundation. We saluted veterans running with US flags, and a German man who had run 208 marathons. We got attacked by the Wellesley kissing bandits and cheered on by college kids who MAYBE had a little too much to drink.

As we approached the 15-mile mark, Brad and I kept the dialogue going with Jeff. As I’ve learned in past races, your longest training run can create an artificial limit in your mind. Though Jeff had pain, some dizziness and even nausea, he remained focused. Each water and walk break was brief and he insisted that we keep going when I suggested extra walks.

I broadcasted on Facebook Live and read the comments out loud so we all knew the love was flowing from back home and across the world. It was a temporary but welcome distraction from pain.

Then I heard Jeff say out loud, “Go away. Just go away. You’re not going to stop me now.”  He was talking to the pain and fatigue, refusing to let it override his body and mind.

As we started up Heartbreak Hill, he wanted to run but he stopped suddenly in the middle of the street. “Oh crap, my right quad is starting to give out.”

We had done the math and wanted to keep a pace to beat a 6-hour total finishing time, but I convinced Jeff that it was better to walk up the remaining uphills and take advantage of the downhills to make up some time. His body was overheated and under stress, but his heart refused to break.

There is nothing like supportive applause from the roadside crowd, I did my best to reignite the Boston faithful so late in the day. Each cheer brought a shot of adrenaline like a cool breeze on a hot day. It kept us believing.

We rounded the last corner and saw that historic finish line in the distance. And when they announced our names, Brad and I raised Jeff’s arms in triumph as we have done in every race… but this one was historic in another way.  I have never seen a more gutsy display of focus, determination and sheer will to cross a finish line.

I couldn’t help crying as we hugged. I had been prepared to carry Jeff across the finish line if I had to, but I didn’t have to.  Every time I thought he had hit his limit that day, he decided to fight on.

That’s a choice we all have when we hit a limiting belief in our lives. There’s a reserve deep down inside us. It’s fueled by love and support, and ignited by courage.

Jeff, you really showed me something amazing yesterday. There is no limit to your strength.  Thank you, brother.