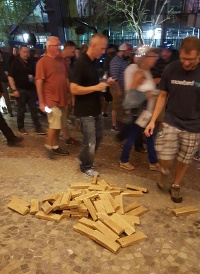 It was an impressive stack at least fifteen high. This guy was playing Jenga with oversized blocks on the sidewalk in front of a bar in Las Vegas. As the crowd crawled by, he was carefully trying to extract a block from the middle of the stack. I stopped for a moment to see if he could do it.

Then without provocation, an obviously intoxicated idiot stepped in and kicked over the tower of blocks! Are you kidding me? What a jerk. The people watching cried out in unison “Ahhhhhhh,” and the dude who was playing jumped up and threw his hands in the air in disbelief. I took this photo right after that moment.

I fully expected the Jenga player to go after the jerk, but he did the opposite. He simply sat back down and began to build again, but this time with his back to the attacker to protect his tower. He didn’t attempt to understand why the bully knocked it over. He just began rebuilding in the exact same spot.

Something struck me about his response. I was happy he did not give up on his mission, but I was happier to see him take steps to defend himself. I also wondered how many times he would take that aggression from the jerk before he’d take a swing and lay him out on the sidewalk. And would the crowd join in to help, or lament the poor bully’s hard life and avoid getting involved?

If you ignore an unjustified attack, it’s likely to happen again.

Maybe this post is not about Jenga at all.