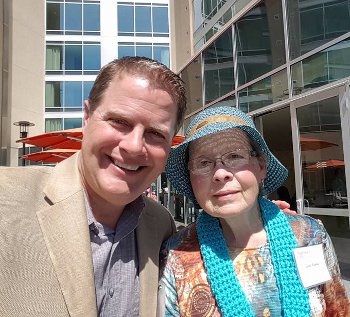 “Can you hold the microphone? I’m not good with those things.” Janet Rainey adjusted her hat and peacock blue knit scarf as I pre-interviewed her about her story. She was volunteered to answer one of my questions in front of an audience of 125, who also happened to be cancer survivors.

Janet, a sweet and soft-spoken lady in her 70’s, has been through the proverbial ringer with two bouts of cancer. She lost her husband three years ago, but the ladies at her church rallied to take care of her. They brought her meals and nutritious smoothies every day for 3 months, drove her where she needed to go and helped her remain positive through even the darkest days.

I was invited to be the keynote speaker at this event, to share the story I’ve experienced with my brother Jeff. My speech was intended to wrap up a day of massages, manicures, workshops and other services, all delivered free to the survivors. The volunteers had already delivered a whole lot of giving that morning.

I accepted the challenge of delivering a message of hope after the closing lunch, but came away with receiving far more than I gave.

For example, in my hallway conversation with Donald, he looked me straight in the eye before he left and said “I don’t let nothin’ stop me. Nothin!”

A young mom, Tara shared with me, “Some of the people you thought would be there for you disappear, but you will be surprised by the overwhelming generosity of strangers.”

And Laura Muckey from Elk Grove, who has gone very public with her story (follow her on facebook), “I’m sharing my experience because I want to educate other women and save lives. I want my life to matter.”

So I delivered my speech, sharing lessons I’ve learned from my brother Jeff and holding him up as an example of someone living life with cancer in an amazingly positive way. Jeff and I have created a circle of giving that has changed both of our lives.

Which brings me back to Janet in the hat. I stepped off the stage and asked her to share what we talked about earlier, about the importance of surrounding yourself with positive people and dismissing the rest. She had emphasized she doesn’t have time for negative people in her life.

She delivered these words to the audience, “You need to cling to positive things and also remember that when you accept help from other people, you are actually doing something for them when you allow them to give to you. Try to give back to the best of your ability, even when you’re sick. I wrote birthday cards and anniversary cards because that’s something I could do, and it made me feel productive. With God’s help and the help of your friends and family, you can make it through.”

Running a marathon or climbing a mountain may be amazing accomplishments when you are being treated for cancer, but what Janet does is no less of an epic effort. It’s the attitude that matters. It’s taking control of your life and not letting anyone or anything take you… from you.

P.S. I’ll close with a plug for Jim Linderman, who pulls together this act of love event every year in Stockton. If you’d like to donate your time to A Treat-Meant for You next year, please reach out to him. Thank you Jim, for allowing me to be a part of your circle.