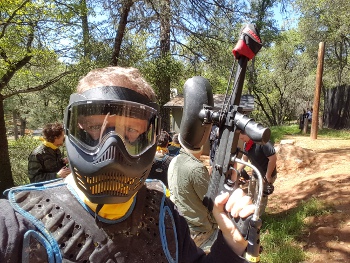 I have watched many gunfights in movies. I have played Halo with my son and his teenage friends. But nothing prepared me for what it would really feel like in a war zone. It was my first time playing paintball and I was asking a lot of questions.

“How many shots do I have in this gun?” I asked the girl at the counter. She replied with a routine and politically correct response, “It’s not a gun, it’s a marker.”

I smiled in disbelief. “What? We’re going to be throwing Sharpies at each other?”

She was not amused. She handed me my oversized goggles and a yellow bandana to tie around my neck. She said, “You’re a first timer aren’t you?”

“Yeah but I shot BB guns a lot when I was kid. I’ll be alright.” She stifled a laugh and moved on to the next player. I walked away singing “I’m a paint ball wizard, there has to be a twist. Paint ball wizard. Just. Will. Not. Get. Hit.”

As soon as the air horn sounded our team was on the move, up the hill through the rocky and tree-covered terrain. I was no dummy. I ran toward the tallest and widest boulder I could find and flattened my back against it. I learned this move watching movies. I got this.

I could hear every short breath inside my mask as I peeked around the massive rock. That’s when I saw the jawbreaker-sized yellow projectile hurling at high speed right at my face. I closed my eyes as I heard the smack of the impact… fortunately on the edge of the rock, not my face. Yellow paint sprayed into the air as I snapped back to my hiding place. 5 minutes ago I was singing and laughing. Now I was 100% focused.

It’s just like when life throws several challenges at you all at once. You get laser-focused on what you need to do to survive.

The soldiers on the other team had my full attention, and I peeked out again from the rock to scan the field of battle for threats. My pulse raced from the adrenaline surge, and then I got this very unsettling feeling. I was scanning 180 degrees of my field of vision to the front, but what if they were sneaking up behind me?

I quickly looked over my shoulder, and there with his back against the same rock was Philip, a veteran player who was covering the other 180 degrees behind me. He literally had my back. And just like that… I relaxed and returned my focus to what lied beyond the rocks in front.

An hour later I walked away from that field of battle with a few bruised ribs and a lot of leftover paint pellets. But more importantly, I had a new sense of appreciation for real soldiers on real battlefields, and a renewed sense of what it means to have someone watching your back. Someone who cares enough to cover you no matter what.

Whether it’s a weekend paint ball game, a challenge at work or a relationship struggle, I am so grateful for the inner circle of good friends who look out for me. And any time they are under fire, they can count on me to defend them without question as well.

Who’s got your back?