A call for help 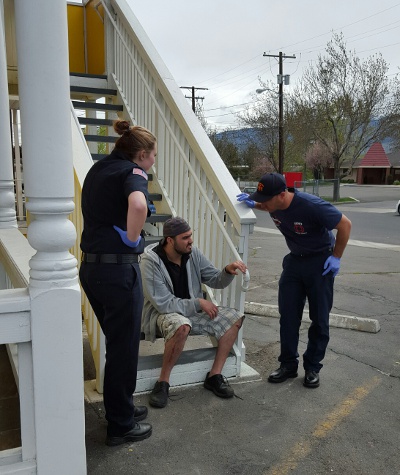 Driving through Reno and out of the corner of my eye I see a crumpled heap of laundry on the sidewalk. Oh wait, that’s a human being. He was flat on his back with legs askew, not the position for someone who decided to just take a nap. I had to pull over to take a closer look and help if I could.

He was 30 something with a scruffy beard, but dressed like a frat boy in long shorts, hoody, polo shirt and black tennis shoes. His baseball cap was turned around backward and he was completely unconscious. I took a step closer, not even sure if he was alive.

His eyes blinked open, dazed and confused. I kneeled down to talk to him and held his shoulder to keep him from trying to stand. I asked if he’d been drinking and he was able to mutter “Yeah a little bit.” The whiff of alcohol told me it was way more than a little. I asked him if he had ID or a cell phone and he reached into his front pocket and pulled out a half-empty pint of vodka. I threw it into the bush, looked him straight in the eye and said “You don’t need that, it’s not going to help you.” He was too drunk to argue.

He tried to stand up and walk and nearly tipped over into the street. I couldn’t just leave him there, so I grabbed one arm and helped him down the sidewalk. He said he lived “right over there” as he pointed to a Bank of America. That was enough.  I sat him down on a stair and called 911. The operator asked a few questions and then transferred me to the paramedic dispatcher.

I hung out with him until they arrived 10 minutes later. Fire and paramedic trucks with a total of 6 people attended to him. I told them his name was Rich and that he was in really bad shape. They didn’t need anything else from me. I snapped this picture and I was on my way, believing he was in good hands

Now for the truly disturbing part… I drove down the road and 3 minutes later realized I needed to make a u-turn to get back onto the freeway. I passed by the scene again and saw the unbelievable… Rich stumbling down the sidewalk. No, it couldn’t be him. Yes. It was.

The firetruck was gone but the paramedics hadn’t left yet. I pulled up broadside and rolled down my window. “Hey, why did you let that guy go?!”

Apologetically, the paramedic said “There’s nothing we could do. He answered all the questions and we can’t force him to go to the hospital. It’s legally like kidnapping if we do that.” I could not believe my ears. Is this really true? Could any of you paramedics out there enlighten me on the policy for situations like this?

Maybe I should have asked for the police to take him to a cell to sleep it off. Maybe I should have poured him into my car and drove him to the emergency room instead. All of us letting him stumble back out onto the street to fall and crack his head or get hit by a bus does not seem like the right thing to do. Does it?

I don’t know if I’m more disturbed by how drunk this guy was at 3:00 in the afternoon, or by the rescue workers inability to do anything about it. Please pray for Rich. Pray that he gets help and that he gets sober before he dies way too young.

If you found someone who was a danger to himself and others and unable to tell you where he lived, what would you do?