Can we just stop?

You are here:
General 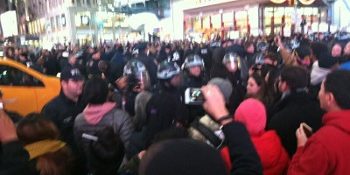 I wasn’t watching news, I was suddenly in the middle of it. Walking to the subway in the cold with my colleague after a work day in Manhattan, we were stopped by an unexpected show after dinner.

A long line of NYPD officers was forming in front of their well-lit station in Times Square. As we walked further, we saw a few hundred chanting protestors gathered in the middle of the intersection and surrounding sidewalks. The police had formed lines with bodies and vehicles to contain the crowd, and I’d say the officers easily outnumbered the civil disobedients.

My friend and I were fifteen feet away from a potential moshpit that I did not want to get swept up in, but we didn’t want to walk away. It was a very different perspective than the aerial view we usually get from news crews. The tight formation of police in riot gear was unusually calm in the face of a horde of citizen reporters holding camera phones and fists high in the air.

The most brazen protestors wore bandit kerchiefs and got as close as they could to the cops. Make no mistake, they wanted to provoke a confrontation to feed the cameras and fuel the fire. It was scary, but riveting to watch.

The mob began to sway as the police began to remove seated protestors from the street to let the stranded buses and cab drivers through to do their jobs. We backed up another few feet and snapped a few photos of our own. And that’s when I began to listen in to those around us.

Many young protestors were angrily shouting slogans about police states and justice, but there were also real conversations going on. Right next to us, an elderly African-American gentleman approached an officer standing near the end of the police line. “I’m a paratrooper, dammit… a paratrooper! Come on man, can we stop all this boooolshit?! Can we just stop?!”

I expected the officer to react, but they were obviously trained not to engage in verbal battles in situations like this. Instead, he smiled. And then he extended his hand to the old paratrooper. They shook hands and shared a moment of mutual respect. Then I couldn’t help myself. I said “Hey paratrooper!”  I shook his hand too, and thanked both him and the police officer for their service.

I couldn’t get the old soldier’s words out of my head. “Can we just stop?” It reminded me of Rodney King’s “Can we all get along?” which, for those too young remember, was a plea to BOTH sides to return to sanity.

I am merely one more citizen reporter with a camera phone, and you may dismiss my opinion based on my skin color, gender or age. But I want you to know that I saw something in both men’s eyes in that moment… a combination of pride and sadness. Both were proud of the country they served, but sad that we can’t seem to get our act together on cultural unity.

Maybe “Can we just stop?” is too tall of an order for both sides in the heat of battle right now, but I suspect the key to a constructive answer may not lie in our ability to shout, but to listen.