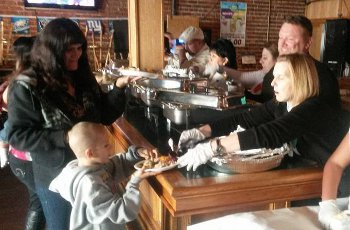 We were not only serving Thanksgiving meals to the homeless, we were serving the hungry and alone. I observed and learned a few things volunteering at the Great Plate on Thursday. It was a heart opening experience for me.

First… people who volunteer do it out of passion, not obligation. Theresa, Iwa and the rest of the team worked very hard to make it a welcoming experience for those who showed up. It was not just about serving hot food, it was about serving respect for fellow humans and showing them kindness.

After cutting up 210 pieces of pumpkin pie, I was looking for something to do… and decided to make it my job to talk to anyone who was eating alone. Each person was happy for me to pull up a chair, and share their thoughts on a day devoted to gratitude.

There was Frank, born in the Middle East but living in the US the last 20 years. I asked him about the differences between the two worlds in his experience. He cautioned me against generalizing about anyone. Then he offered that he thinks Americans are very outgoing and caring on the weekends, but care mostly about themselves Monday through Friday. I thought that was a worthy observation, and wondered if I get too caught up in my work week sometimes to help others in need.

Then there was Mike, proudly sporting his blue and yellow Viet Nam Veteran hat. I was about to thank him for his service to our country when another guy interrupted just to thank him for his service to our country. He seemed happy for my company, and I asked him about his job in the army. His eyes teared up as he described what it was like being a medic on a helicopter picking up the wounded and transporting them to a MASH unit. He had to cradle the heads of 19 year old soldiers in his lap as they lost blood and deliriously asked if their girlfriends were still waiting for them back in the states.

I shook his hand and held on a few extra seconds as I thanked him again. I said, “Mike, you made a difference for every one of those soldiers, whether they survived or not. I’m honored to meet you, sir.”

As the service hours were winding down, my wife Carol packed up a dozen to-go dinners in white Styrofoam and we set out in the car to find any homeless friends in Tracy who didn’t make it to the restaurant. It didn’t take long to discover the loaded shopping carts and makeshift camping sites, and how the homeless look out for each other as well. With each delivery, we got a recommendation for another location where their friends would also appreciate a hot meal.

A grey-haired woman named Kathleen summed it up best. She told us about several spots where homeless folks could typically be found. “And if you go out by Wal-mart, that’s where the drug addicts always hang out.” She saw my facial reaction to the drug comment, then smiled a warm, wrinkled smile and added, “But just because they’re drug addicts doesn’t mean they don’t need food and love.”

There are plenty of people in need around our planet, and giving money to international relief causes is a wonderful thing. But if you think about it, the easiest people to reach are the needy in our own local communities. I highly recommend keeping your eyes open and helping when you can. And it’s not just about money or food. They will remember the gift of your kindness, so serve it up in big helpings.