These are the brakes 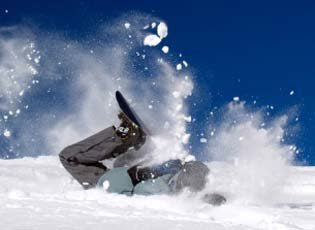 I stood on the edge of the black diamond run looking down at the snow-frosted rocks and towering pine trees, intimidated by the difficult terrain on that long run to the lodge. I had recently converted to snowboarding from the comfort of two skis, and earlier that morning this 40-something dude was by far the oldest human in that beginner’s class full of 14-year olds.

I wiped the fog from my goggles and looked down the steep hill again. My knees were shaking, and not from the cold. It used to be so easy to traverse on two planks, work my way down the hill and stop on a dime when I wanted to. This funky snowboard required a whole different body motion and balance to stop (gracefully.) I could always just sit down or snow plow with my face, but those aren’t recommended by the instructor.

I suppose any sport propelled by the forces of nature — skiing, downhill cycling, toboggan, hang gliding — all have the same inherent challenge. It’s the challenge of how to stop after your thrill ride without ending up in the hospital.  I mean, how many of you could drive a huge hunk of metal at 70mph without the confidence that your brakes would work when you stepped on them?

It’s the same with any challenge you take on in your life, including new projects and career moves. Motivators tell you to commit… just go, go, go! Point your snowboard downhill and figure it out along the way. But wouldn’t it be helpful to set a few “stop and assess” waypoints along the way? Put on the brakes a few times to pick your best route down the hill before you start careening out of control?

That morning I learned to snowboard, I spent 4 hours working on only one thing: how to come to a stop. And as soon as I mastered stopping, nothing could keep me from starting.