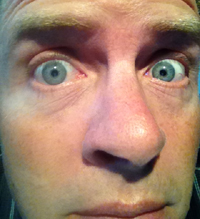 I could rattle off the family roles I have played in my life: husband, father, brother, son, grandson, cousin and nephew. I could ramble on about the career roles: marketer, trainer, video producer, speaker, entertainer, writer and consultant. I could define myself as the sum total of all the experiences I have lived, or an amalgam of every friendship I have learned from.

But would any of these single labels really capture the essence of who I am today? Honestly, the answer to that question is a moving target. It’s relative to what’s happening at the time and which environment I am thrown into. I don’t really want my life narrowed down to a simple definition because it doesn’t accommodate evolution.

The best I can give you is this… a personal mission statement. It’s a three-part guiding principle I decided to follow at the beginning of this year:

“To inspire, entertain and model my own advice.”

Inspire and entertain are both pretty self-explanatory, but “model my own advice” means I will not recommend anything to anyone else that I would not do myself.  It’s kind of a Golden Rule for Gurus.

So who am I? I’m a regular guy navigating life’s trials the best he can, setting a good example by achieving the most he can, and helping others along the way. If you drift into my sphere of influence, I hope you get inspired and have a laugh or two while you’re here. Take all you want. No charge.

The only charge I hope you feel is the electric shot of adrenaline you receive when you achieve one of your life’s goals. There’s nothing I love more than seeing you discover who you really are too.