Just for a second 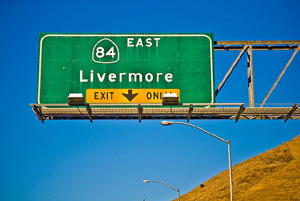 One second we were all humming down the 84 in Livermore at 45 mph. The next second the brake lights are all lit up and we are grinding to a halt. I edge over to the right side of the two-lane road to see what’s going on. Four cars ahead of me, I could see a white pick-up truck flipped completely over in the ditch with it’s back tire still spinning in mid-air. I pulled over, hit my hazard lights and ran in my dress shoes to see if I could help.

When you approach a wreck like this, you never know what you’re going to discover. I held my breath as I bent down to look in the cab with two other guys who just arrived. Luckily the window was down and we could communicate with the driver, who was conscious, upside down and trying to free himself from his seatbelt. The guy next to me shouted, “We need to get you away from the vehicle!”

The man did not speak, but worked his body closer to the window. We each grabbed an arm and helped him slowly squeeze his body free from the wreckage. I was surprised as he stood right up and brushed off his oversized flannel shirt. He was in his late 60s, with a short grey beard and rough blue collar hands. I could tell he was a handyman by all the tools, paintbrushes and supplies strewn across the road and into the ditch where the truck landed.

Another bystander called 911. We got him several yards away and sat him down on a flipped over white laundry basket that had flown out of the back of his truck. The other guys just went back to their cars, as if to escape the scene before the emergency responders blocked the road. The man was obviously in shock so I didn’t want to leave him alone. I put my arm around him and talked to him. His name was Louie, and he seemed to be a lot more concerned about his truck than himself.

I asked him if he remembered what happened. He pointed to the grooves cut into the road between the yellow lines, meant to alert drivers who might be drifting into the other lane. He looked down at his work boots and shook his head slowly. “I looked away. I just looked away for a second.” He described how he had heard the noise, looked up and overcorrected to the right. I could see the telltale tracks in the muddy grass and the place where his tires fell off the uneven shoulder and he lost control in the steep ditch.

The firemen, police and paramedics came on the scene a short time later and I relayed what I learned as they took over. I really felt for Louie and I hope he’s OK. I got back in my car and continued my own commute, but I could not forget what he told me, “I looked away… just for a second.”

I think that’s the lesson I was meant to learn this morning: Safe driving requires focus. I thought about all the times when I quickly look down at my phone or fiddle with the radio or a cup of coffee. It takes just a second for something to go terribly wrong on the road. Be safe, my friends. And pass this story on to someone you love.