A reason to be optimistic 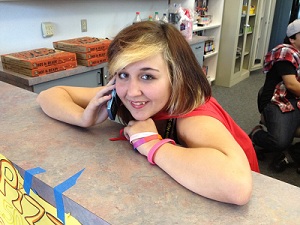 It’s so easy to criticize today’s teenagers. They have it SO much better than we did, right? They’re so spoiled with their cell phones and cool clothes and prom limousines. You might think they’re so self-centered that they don’t care about their community. And you would be wrong.

The Stein High School Key club in Tracy, California proved me wrong. They organized a Halloween movie party fundraiser that netted $156.25 for the Multiple Myeloma Research Foundation. With my promised matching donation, their effort generated a total of $312.50.

The idea came to Maddie (pictured above) when she witnessed my crazy skating stunt back in August. She invited me to speak to their club and share the story of my brother Jeff, a Multiple Myleoma survivor.  I brainstormed with around 30 young adults in their afternoon meeting, and they took the special event idea and ran with it from there.

It’s not easy to put on an event and get people to show up, but they stuck with it. And because every dollar counts in the battle against cancer, it was a very worthy cause. I went to the event and had a great time eating pizza, playing games, getting my face painted, eating homemade cupcakes and watching a Nightmare Before Christmas on the big screen.

So as I look ahead to how our country and our planet may fare in the future, I am optimistic. If we have enough bright, enthusiastic and caring students like those I met in the Stein High Key Club, we’re going to be more than alright! Thank you Key Clubbers. You are making a difference!!