The right kind of crazy 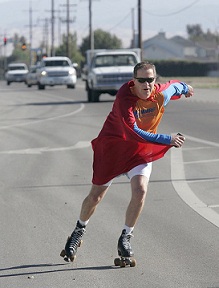 Yep, I did it. I roller skated 11 miles across town during rush hour in a red cape and SpongeBob boxer shorts. And so far this “stunt” has raised nearly $1000 for the Multiple Myeloma Research foundation! My virtual guest of honor was my brother Jeff, who told me he got a big kick out of it and thanked me for jumpstarting our Marathon fundraising. (And big thanks to my friends Victoria Rynberg and Sean Dyer for their support!)

What I’m still laughing about is a reader comment after the story at Tracypress.com:

“As someone who works in San Francisco, this kind of spectacle is not entirely unseen on nearly a daily basis, but it’s quite different to be seen in Tracy. Also, the SF folks doing things like this are typically under the influence of a controlled substance or are certifiably crazy. Either way, drawing attention is usually the goal, and I’m glad Mr. Goad was drawing attention for a worthy cause. The fact that he didn’t back out of his potentially embarrassing promise helps to define his character. If we’re gonna have crazy here in Tracy, Mr. Goad is the right kind of crazy.”

I consider it a badge of honor to be called crazy. As the reader pointed out, I was drawing attention to a goal… the goal of raising money so the research scientists can develop a cure for Multiple Myeloma. I also wanted to show Jeff that I’m willing to do anything to accomplish this goal, and encourage him to keep fighting and surviving.

Give to the cause