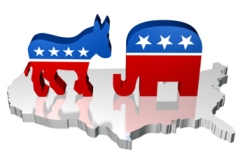 Presidential election season is fun isn’t it? Our mostly two-sided party system divides our country almost neatly in half. Like medieval armies, both left and right have their absolute diehards who hang out at the edges of the battlefield shooting verbal arrows into the air at the other side. If you are convinced that one of these sides will always be best for you, then good for you.

And then there are the “undecided.” Without the luxury of being uniformed soldiers, their job is really much harder. They have to engage in up-close debate in the middle of the battlefield.  They have to listen with the intent to understand. They have to weigh pros and cons. They have to make up their minds based on results and the promise of results.

There are a handful of so-called battleground states where they say the decision is uncertain. The battlefield is really inside the minds of the undecided in these states. And the decision ought to be about ideas and leadership, not sound bites and character assassination. People ought to be making up their minds based on what makes sense for the good of our country, not an emotional script fashioned by a good script writer.

We are about to peaceably elect leadership again for one of the greatest nations on earth. And this battle will not be won on the edges of the battlefield; it will be won by the undecided. If you are in this middle ground, I encourage you to really pay attention and do your homework before stepping in that voting booth this year. Read analysis from both sides on the issues you care most about, and think about what you want government to do and not do.

I know the arrows will be flying over your head. Please ignore the negative ads, gaffe press releases and party line rants. It’s also OK to laugh at the late-night jokes… but please don’t let that make up your mind for you.