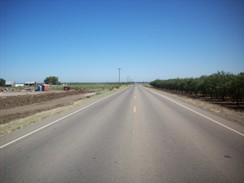 I came close to calamity yesterday. I was doing 30 miles per hour on my bike, rocketing down the 2-lane country road with a strong, dry tailwind pushing me forward. I was with another rider, Bob (name changed to protect the innocent.) We were way behind the pack because I had dropped my gel bottle and had to go back for it. Now Bob was pulling me along as I drafted right behind him.

We were approaching an intersection with a clear view to the left and right. It’s not unusual to cruise through stop signs in the middle of nowhere when all you see is farmland. Bob slowed to about 20 mph and I figured he was just verifying no cars. I was riding in his left blind spot and I pushed to accelerate straight through as we approached the intersection.

That’s when Bob suddenly leaned toward me and started to make a left turn right into me. I shouted “Whoa whoa whoa!!!” He braked at the last second and just missed my back tire as I went straight through the intersection and he turned left behind me. My adrenaline was pumping as I envisioned how ugly that wreck would have been at 20 mph.

Like many situations at work or in our personal lives, behavior you predict does not always come true. A little communication can go a long way toward helping you avoid conflict. Even if you think you know what someone else is thinking, it never hurts to ask and make sure.