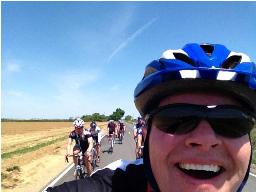 A body at rest tends to stay at rest. A body in motion tends to stay in motion. So how do you get your body started? The catalyst that generates exercise inertia is different for everyone: it could be wedding photos, fundraising, doctor reports or relationship status. For me it was reaching an uncomfortable milestone in my weight that made me say “No more!”

Through the lens of social media, I have watched many friends make the fitness decision, make it public and make it happen. Some have gone from bad to good, some from good to great, and some from great to fanatic. What they all had in common was a starting catalyst and a magic moment of inertia where they realized the benefits outweighed the pain. In every case, they learned that they could do far more than they thought they could.

I used to make lots of excuses and jokes when I was “underhealthy.” I eventually discovered that most of the seemingly uncontrollable aspects of my life were actually controllable. The excuses were really just friction that kept my body, and mind, at rest.  I also discovered that an external purpose, like fundraising for my brother, motivated my heart in a way that’s hard to put into words.

I do not want to get preachy here. You may have an illness or injury that prevents you from running or riding great distances. You may be prioritizing time with your kids over exercise (a good trade in my opinion.) There are plenty of legitimate reasons not to exercise or eat well.

I just want to share with you that I found will power I didn’t think I had… and I found it at age 47. The first catalyst was weight loss. The inertia point was at 2 months. And now I am still in motion almost 4 years later, pushing myself to new achievements beyond my previously imagined limits. Running 26.2 miles and cycling 100 miles used to be ludicrous jokes to me.

Maybe you have exactly the same potential for motion inside of you. Why not throw away just one of your excuses and try a new activity to see how it feels? Check with your doctor, then ask your friends, family and online community for support and just go for it. I think you will surprise yourself.