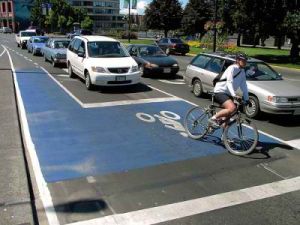 “I am so awesome!” At least that was what I was telling myself as I rounded the last corner of my 25 mile bike ride. I had just pushed myself faster than ever, and I smiled as I wiped the sweat out of my eyes with the side of my glove. I was wearing my coolest cycling gear and feeling superior to all the pathetic drivers sitting in their cars in the intersection as I approached. Yeah…I’m sexy and I know it!

Road bikes today have pedal clips and special shoes that keep your feet attached to them for more pedaling power. You cyclists know that you have to twist your ankle outward to disengage the clip before you use your foot to come to a stop. You cyclists can also probably guess what is going to happen next.

I coasted to a stop in the left lane of the intersection, in full view of all the cars waiting their turn to go. With my mind focused on how awesome I was, I neglected to twist my left ankle enough to unclip all the way from the pedal. I braked to a stop and my weight shifted to the left. And with no foot to put down I tipped right over and slammed into the pavement!

Nothing is more humiliating than falling over when you are standing still. I would rather slam gloriously into a tree at 25 mile per hour. At least I would be falling on the playing field instead of while standing on the sideline!

I immediately regressed to an embarrassed little boy who fell off his bike with everyone watching. I purposely avoided eye contact with all the drivers who were surely laughing their butts off at Mr. Awesome. My elbow got banged pretty hard but my helmet saved my head. So I got back up on the bike and pedaled home with my intact head hung low.

I am thankful that I have the strength and will to push myself in athletic achievements. I’m also thankful, every now and then, for reminders that I am human. The next time you’re feeling full of yourself, don’t lose sight of the fundamental pedal clip of humility. The lesson here is Proverbial, “Pride goeth before a fall.”