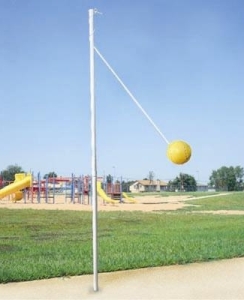 Hey fans, it’s that time of year when we talk about a nation-wide sport that favors the strong and strikes fear into the hearts of the weak.  No, not the NFL playoffs… I’m talking about tetherball, the classic contest of physical agility and hand-eye coordination.  I just watched the scene at the end of Napoleon Dynamite, where he goes high and hard with the ball as the poor girl watches the rope wrap around the metal post.

This “buzz saw” move was not uncommon when I was a kid on the playground. It didn’t help that I was one of the shortest kids, and it was tough for me to jump up and stop it. However, I never took my off the ball because sometimes the trajectory would change or my opponent would mis-hit the ball just enough to allow me to get back into the game.

Do you ever feel like challenges are coming at you at high speed, and life is spinning so fast above your head that you can’t get a handle on it?  You have a choice to keep jumping frantically in the air like a dork, trying to hit the ball or you can stand back and wait for it to calm down a bit before taking your shot.

I don’t see anything wrong with the strategic approach – watching the ball for a few rounds and taking note of how the speed and angle changes.  I try to tackle life challenges the same way – watching, listening and thinking before I react. Sometimes I wait too long and the rope wraps around the pole (game over,) but a few rounds usually don’t hurt me.

See?  Tetherball is just like the NFL… smart defense wins championships and cooler heads prevail under pressure.  And most problems are not solved by frantic over-reaction. Take your shot when you’re ready.