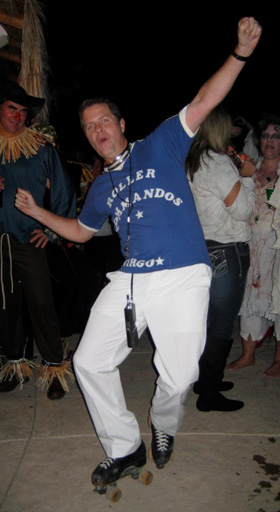 Flashback… The rink goes dark.  You hear the intro to Red Ryder’s Lunatic Fringe blend into Earth Wind and Fire on the massive subwoofers.  The multi-colored lights reflect across the polished skate floor.  Homemade flash pots with a little too much gunpowder shoot a mini-mushroom cloud of smoke up into the high ceiling, mixing with the smell of popcorn and bubblegum.  The skaters strike a dramatic pose, and then kick into a series of crazy legs, coordinated steps and spins.  The girls go wild!

At least that’s how I remember it.

There were 6 of us original Roller Commandos, and we did skate dance routines in roller rinks around Central Indiana in the early 80’s.  I am referring only to the performing group, not the rumored band of roving rascals who irritated late night janitors and security officers on the Purdue University campus.  I can neither confirm nor deny their existence.  This story is about the short-lived line dancing Commandos based out of SkateAway in West Lafayette.

I give all the credit to Rich Knight, a born show promoter who organized the group.  All of us either worked at the rink or were regular rink rats.  Rich choreographed most of the routines to a cassette tape I mixed in the DJ booth. This 2006 movie “Roll Bounce” captures the skate dance style pretty well (watch at 45 seconds.)

The early days of rap music had light-hearted subject matter. Rappers declared they had the best rhymes and therefore deserved the attention of the ladies.  And maybe that’s why we were getting our groove on in those matching blue shirts and white painter’s pants – trying to impress the ladies. For me, I remember feeling the joy… the joy of having a great time without worrying too much about what others thought of me.  If you like it, cool.  If not, cool.  Either way, it’s cool.

So for a Halloween party last Saturday, I resurrected the costume with the original shirt and skates I kept from my youth. As a prop, I brought my old vinyl 12-inch of “Showdown” featuring the Sugar Hill Gang and the Furious Five.  To my surprise, the twenty-something DJ actually had a Technics turntable and played it for me.  I did some spins and crazy legs on the dance floor (without pulling a hamstring), and somehow avoided falling in the pool.

I got my skate on.  And for just a few fleeting moments… I was 19 again.

There is little photographic evidence of the original Roller Commandos, so I dedicate the photo above to Rich, Derek, Kevin, Kenny and Chuckie, and to all of you honorary commandos who lived that era with me.  When is the last time you did something just for the sheer joy of it?