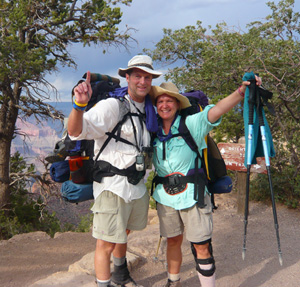 It was June of 2010 when my brother Jeff first used the word cancer in a phone call.  “I’ve got multiple myeloma and I have to start treatment immediately.” I responded with optimistic strength in my voice, encouraging him to beat it.  After we hung up I googled the facts about this rare blood cancer and its typical survival rates… and my eyes teared up.  My older brother’s life was in jeopardy and he’s only 50 years old.

The next time we talked he described in more detail about his upcoming 6 months of chemotherapy and stem cell transplant… relatively new advancements made possible by the Multiple Myeloma Research Foundation (MMRF).  Basically he was about to go through hell, but it was a hell that would save his life if his body responded to it.

I contemplated how I could show my solidarity.  What really hard thing could I do in parallel with Jeff’s treatment to show him how much I supported him?  “Hey Jeff, if you beat this in 6 months… I will, uh… run a full marathon! And I’ll raise money for cancer research in the process!”

He was instantly cheered up by the idea, and I was instantly wondering what the heck I just committed to.  Jeff was an experienced marathon runner and he was going to coach me.  I also reached out to the great people at MMRF Endurance Events to help me set up a website and the fundraising began.

Jeff weathered the treatments as I ran in rainy weather.  He suffered through long hospital stays while I blogged about my training progress.  We each took courage from each other and he told me it made a big difference in his positive frame of mind.  We also overcame setbacks together. I had a leg injury 3 weeks before my race.  His first stem cell transplant did not achieve complete results.  I was able to finish my marathon, but his continued for another 6 months.

And here we are today… Jeff’s doctor is almost ready to declare complete remission, as the numbers are getting nearer to zero.  I am happy to say the thunderstorm threat has been reduced to a few wispy clouds of uncertainty.  When I think about my brother’s battle the word “courage” keeps coming to mind. Anyone can fight, but it takes real courage to fight when the odds are not in your favor.  That’s why I love and respect my brother, and will continue to fight on his behalf.

In early September Jeff and his wife Ramona backpacked through the Grand Canyon, demonstrating his mental and physical toughness… 3 days, 19 miles, 100 degree temperatures and 10,000 feet of elevation change.  6 months ago he could barely walk around his block!

On October 9, he will run/walk the Chicago marathon, side by side with our brother Brad, to raise money for MMRF. You can join the fight too using the link below. Research leads to treatments.  Treatments save lives.  What a difference you can make by giving.

(Rated in the top 1% of all charities evaluated by ‘watchdogs’ like Charity Navigator.  90% of all funds raised go directly to research!)