When the rock won’t move 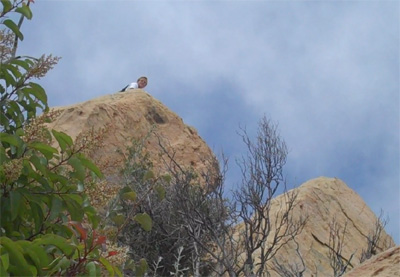 Self-doubt is a powerful force. I’m staring up at a 15-foot sandstone rock wall, assessing how I’m going to climb it.  My son had already scrambled to the top like Spiderman, not intimidated by the small footholds or the hard surface he could have fallen down on below.  We had been climbing for 3 hours up a boulder-heaped “trail” called Dragon’s Back and the summit was in sight.

“Come on, Dad you can do it,” Evan tried to encourage me from his vantage point above. All I could think about was the Wikipedia entry for Class III rock-climbing, noting that “not all falls from rocks of this height will be fatal.” That was a comforting thought.

I know that sometimes “scary” is necessary to cross over thresholds you previously thought impossible.  But this literal wall in front of me, which at the very least could cause me to break my leg, was causing me to have one of those “when to stop” moments.

I took a step back and took a long, warm sip of water from my camelback. Then I slowly looked to the left and to the right as I finished off the last of my Cliff bar.  I shouted up the wall, “Hey Evan, can you see a way around from up there?”

He checked out the terrain on the side of the mountain, a collection of jumbled sandstone boulders, sharp yucca plants and twisted Manzanita bushes that had been burned black in the Santa Barbara fire 2 years ago.

He shouted back, “If you backtrack 20 feet and go down and around, I think you can make it.”  He started climbing over to the left side to meet me.  I went “off-road” and it was rough going, snagging my backpack on the gnarled brush and slipping in the loose dirt, but I made it all the way up to meet Evan.

We eventually made the summit together, and to me it was even more satisfying that I did it without taking the risky climb on the 15-foot wall.

The life metaphor is fairly transparent… we often come up against seemingly insurmountable challenges and assume there is only one way through. Truth is, I didn’t have to defeat that wall directly because I was able to outsmart it.  But make no mistake, I DID defeat it.

There is nothing wrong with going back down and around when you have to overcome an obstacle.  Even when the rock won’t move… what’s stopping you from taking a new direction? 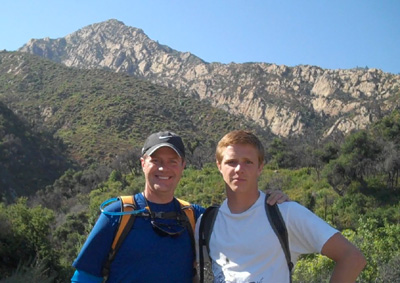 Photo: David and Evan Goad with the Dragon’s Back ridge in the background.