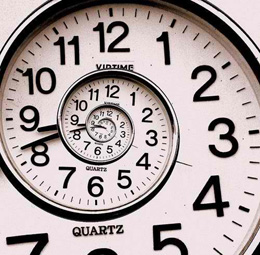 When you say “I don’t have time for that,” what are you really saying? I suppose it could literally be true. You can’t stop for coffee because you’re racing to catch a train. You have to skip your workout because you’re working late on a project due tomorrow. You don’t have time to write your book because you are too tired at the end of each day.

In all these cases the statement is true. You have run out of time in that moment. The real question is what led up to that moment of truth? It was usually a series of choices made by you, consciously or subconsciously, that caused you to use up your time on other things. Were those other things equally important?

When I “suddenly” find myself out of time and unable to do something I really wanted to do, it’s NOT due to outside circumstances. It is due to how I processed what was in front of me all day long and how I chose to react. It is in those hundred little choices I make throughout the day that determines happiness or frustration; greatness or mediocrity.

For example, I’d say one hour of laughter watching TV with your kids is a great use of time. One hour of watching Jersey Shore alone with a bag of Cheetos in your lap may set you back a couple of rungs on the evolutionary ladder.

Taking on every little task your co-workers ask of you may seem generous and makes you a team player, but is it eating up the time you should be spending on a higher priority project?

Saving your “me” time for the end of each day is a choice, not a requirement. Getting up an hour BEFORE the official day starts throwing things at you may be a much better strategy and get you in the right frame of mind for taking on the rest of the world.

The next time you catch yourself saying “I don’t have time for that,” swap out that phrase with “That’s not important to me.” In some cases you’ll find it is not really important – mission accomplished. However, if you keep delaying something that is truly important, it’s not a matter of time… it’s a matter of choice.