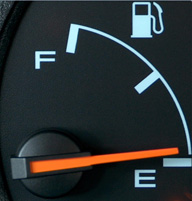 16 miles into a 19-mile run and I’m starting to bonk. I’m training for a marathon and I’ve been faithfully putting in the miles. I just did 17 miles 2 weeks ago with no problem at all.  Why is today different?  Maybe it’s the heat.  Maybe I didn’t drink enough water.  Maybe I didn’t get enough sleep last night.  All these maybes should be figured out for the next run, but right now I’m faced with the challenge of 3 more miles.   Am I going to do this or not?

You runners know how your left brain can mess with your right brain during long distances.  For you non-runners, this is the famous wall you hear about in marathons… usually in the context of someone “hitting it.”  It is sudden; it is real; and it can rob you of finishing with pride.

Jeff Galloway recommends playing tricks on your own mind to shut down the logical left.  Talk to your body.  Tell it to ignore the doubts and fears and urges to stop.  Tell it to open up circulation to your muscles and feed off the healing energy.

I’m playing these mental games as I stare at the long stretch of Chrisman road in front of me.  I can see heat waves emanating off the pavement, distorting my vision like a desert mirage.  The water tower in the distance is my goal, the place  where I stop my watch and celebrate going 19 miles at a 12-minute pace. Am I going to walk or run right now?

When you hit an unexpected wall in any great endeavor, you have the same decision to make.  Are you going to do this or not?  It is a yes or no question.

I visualized the future and saw myself standing at the water tower looking at my watch.  Am I celebrating success, or wallowing in regret for giving up?  Am I proud of what I’ve done or did I let an imagined “empty tank” get the best of me?  That was all it took.  I straightened up and pushed the accelerator.  I didn’t come this far to give up with the goal in sight… I ran all 3 miles.

This analogy works for many challenges you will face in your life. When you hit a wall, what will your decision be?  Are you going to do this or not?  I encourage you to look through the haze and visualize finishing with pride.  You may find your tank was not really empty after all.