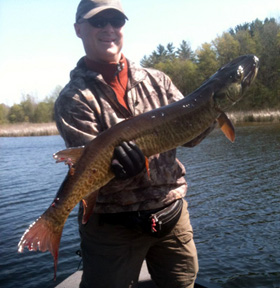 I’m chasing the sunset on a 737 headed back to San Jose.  I just spent some quality time with my dad and brothers on our annual fishing trip in northern Indiana.  While I thoroughly enjoyed scooting around Lake Webster looking for muskies, I couldn’t shake the feeling of déjà vu.  It’s been exactly a year since my brother Jeff discovered he had Multiple Myeloma.

He drove me to the airport after last year’s fishing trip, and made it back just in time for his company softball game.  He swung hard at a ball and injured his back.  This led to a doctor visit where they discovered his vertebrae was compromised by a lesion on his spinal cord.  We both began a journey… him going through chemotherapy and stem cell transplants; me training for my first marathon to raise money for a cure.

His injury allowed him to catch the cancer early and increase his odds of beating it. He went through 6 months of treatment, then had to do it all over again with a second round.  I made it through the marathon with my own share of rough spots, though it pales in comparison to what Jeff has gone through.

Jeff goes in for his final round of tests tomorrow.  We should hear by May 25 if he is in the clear, or if he is… not.  I am praying, hoping and expecting to hear good news, but if it turns out to be “not,” I’m ready to keep the faith and continue my support as well.

Fighting cancer is like trying to catch a muskie – it’s not easy.  The muskie is called the fish of 10,000 casts, because you literally cast your lure hundreds of times and reel it in hundreds of times.  You test out different lures – red bucktails, spinnerbaits and top walkers.   Eventually you find yourself in the right place at the right time and hit the predator when it’s ready to eat.

I was standing in the boat next to Jeff, his fishing cap pulled down over his recently shaved head.  Each of us cast our lures out in an alternating rhythm to make sure we covered each section of the backwater. It gets to be a real test of faith the longer you try, and you are guaranteed to fail if you stop trying.

MMRF is doing a great job testing and documenting results for thousands of patients, looking for the right combinations of drugs and treatments to nail the predator, and sharing data worldwide so success can be replicated.  Every dollar donated to research puts one more cast into the water, helping to cover the vast lake of the unknown.  If you feel so inclined, put a few dollars to good use by donating here (I send donors special updates on Jeff’s progress.)

Last year Jeff was the only one of our fishing group to NOT get a muskie.  This year he was one of the first to land one.  I’m hoping from the deepest part of my heart that it’s the first of many to come!