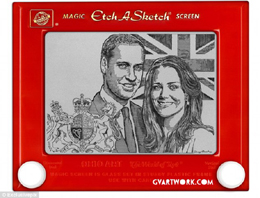 I’m trying to figure out why the upcoming royal wedding between William and Kate is bothering me.  I respect cultural traditions and don’t mind them being kept alive. And I love that the British royal family does a lot of work for charity.  It’s just the concept of being “royal” in the first place that bugs me.

It’s probably because I grew up in the heartland of the United States, a country founded on freedom and rugged individualism.  You have the freedom to achieve anything here if you are willing to work hard for it.

I was not born into privilege, old money or a celebrity family… every scrap of knowledge and material wealth I have today was won through trial and error and hard work.  So the concept of being “born special” is kind of alien to me.  Being dubbed a Prince right out of the womb seems so archaic, and so… unconstitutional.

I don’t mean to be a downer on all the festivities and I hope that the marriage works out (not such a great track record in that family.)  And I also feel like apologizing to you Brits who grew up with the Queen’s face on your money. I had role models George Washington and Thomas Jefferson on my money.

I will give in and wish William and Kate a long reign, and I absolutely do not envy the glass bubble they are about to enter. Though William was born into privilege, he really has less freedom to do what he wants than I do.

I’ll join you in raising my glass to the proud royal tradition, but I won’t be getting up at 3am to watch the wedding.  I’ll catch it later on youtube.