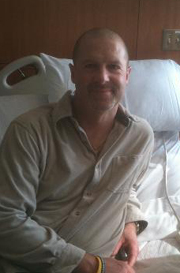 When you catch a fish big enough to take home, that’s called a keeper.  When you hear a bit of advice that’s big enough to take to heart, that’s a keeper too. In the midst of my brother Jeff’s battle with Multiple Myeloma, he uttered a keeper today. We were talking about what keeps him going with such a positive attitude through this rough time and he said,

“Knowing someone knows… gives you strength.”

He was talking about the outpouring of support, the helpful hugs and the willingness of total strangers to cheer him on.  He’s been connected to cancer survivors in Arkansas and added to Sunday School prayer lists in Virginia. He has been the inspiration for over $10,000 raised for cancer research so far.

Jeff inspired me to run my first marathon, and I experienced the same “knowing” when I started sharing the story in this blog.  You reached out to me, offered support and gave generously to MMRF.  When I went down with an injury, you stepped up and gave encouragement that got me over the finish line.

And even if you were unable to help directly with hugs, money or running advice, it has made a real difference to me knowing that you know what I’m going through… as the brother of the fighter.  Something about that simple human connection is reassuring and comforting.

Jeff is in the middle of chemo/stem cell transplant round 2. He’s doing well so far and continues to dispense good advice from his hospital bed.

I kept this MMRF donation site live after my marathon for anyone who feels moved to help in that way.  But most of all, it’s just good to know you know.