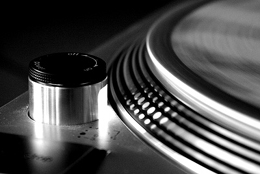 The employee holiday party at the skating rink was raging, and there was no rule against alcohol.  Thursday afternoon was the only time available for our party and we were having a great time.  Some were skating, some were playing free Asteroids and some were having a few too many Molson Goldens. The problem with this was the private fraternity party scheduled at 9pm.

As the manager corralled the staff for the evening shift, he discovered the scheduled DJ’s head was spinning too much to spin records.  He raised his voice, “Hey, who wants to be the DJ tonight?”

I worked as a skate guard, which was really just a glorified security guard on wheels. I had no “DJ training,” but I was sober.

“I’ll do it!” I shouted back.  I stepped up… literally, walking up the stairs on my toe stops to get a view from the highest point in the rink. After Bruce the DJ’s 10-minute crash course on how to run the equipment, he stumbled off somewhere to crash.

“Welcome to Skateaway… all skate now, all skate.” I believe these were the first words I uttered on a microphone in my life.  I muddled through that night somehow, making mistakes but having fun in the process. And honestly, I kind of liked the way my voice was amplified in those booming speakers.  People did what I told them to do… when I say backward skate, you better skate backward or get off the floor!

I digress.  The real point of the story is the turning point – the moment the manager asked if anyone wanted to step up and take control.  Because I said yes, it started a series of career chain reactions that led me into the marketing job I currently enjoy (a long story for another day.)

Had I said no, I’m sure that other interesting paths would have developed for me, but I’m really glad things turned out the way they did.  I wonder how many of these opportunistic points of divergence actually happen to us every day.  One moment… one chance encounter… one decision to take on unfamiliar territory… could make a big difference in your life.

Are you ready to step up and say yes?