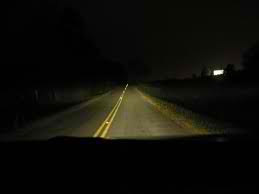 It was a dark and starless night as I rounded the bend on that remote stretch of road. My eyes were tired after a long day at work, and I was zoning out on the drive home. The back road from Livermore to Tracy cuts through rocky hills with tight twists and turns along the way. Suddenly my headlights illuminated a football-sized object sitting right in the middle of the road. I swerved to the right to miss it, but caught enough of a glance to see that it was a large rock.

After the adrenaline surge subsided, I deduced that the rock must have broken loose from the hillside, bounced and rolled out onto the road. Good thing I missed it. I picked up speed again. My wife had to work late, it was my turn to feed the dogs and I wanted to get home as soon as possible.

But the rock in the road would not let go of me.

I started to think about the next driver to come around that bend. Maybe it would be a young mother reaching for a dropped pacifier; or a teenager fiddling with the radio; or another bleary-eyed commuter like me.  I was five minutes further down the road, when the voice in my head said “Move the rock.”

My poor dogs are waiting for dinner.

I am tired and impatient to get home.

Turning around and going back will cost me an extra 10 minutes.

You can probably guess where this headed. I turned around and drove back to the bend in the road, parked my car in a safe spot and turned on my flashers. My headlights lit up the rock as I hustled out to pick it up. And just before I heaved it over into the ditch, I swear… it smiled at me.

This story is not about personal heroics. I just moved a stupid rock and have no idea if that small act made a difference to anyone. I’m sharing it as a challenge to you… for the next time you notice something potentially dangerous to others. It could be a simple road hazard, a friend who’s struggling with addiction or someone making an angry threat against another.

The easy thing to do is drive on down the road, hoping the authorities will catch it or possibly another Good Samaritan will happen by. OR you can turn around, revisit the scene and try to do something about it. I’m not suggesting that you put yourself in personal danger. But if there IS something you can do about it… why miss the opportunity to move the rock?