The price of admission 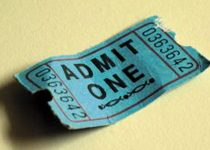 I’ve heard the first step to fixing a problem is admitting you have one. Sounds easy enough. However, most people won’t admit they have a problem because of the price they have to pay to admit it. The price could be risk, embarrassment, guilt and even public humiliation… so maybe it’s just safer to live with the problem.

So the price of admission may be worth it too – admission of the bad habit you know is keeping you from your best, followed by the strength to ask for help to do something about it. That bad habit may be painful to fix, but you will be so much happier in the long run.

I admit  one bad habit I’ve been able to overcome is procrastination. It may not be as destructive a habit as alcohol addiction or anger management issues, but it can absolutely paralyze you into inaction. This self-imposed paralysis can keep you from achieving what you really want in life.

Early in my career, a high level executive gave me an important assignment that I didn’t really know how to do. I didn’t want him to think I was unqualified or stupid in the middle of the large staff meeting so I said “Sure, I’ll take it!”

Then instead of asking for help afterwards, I procrastinated. I fretted over it, stewed over it and delayed it. I ultimately didn’t pay the price of admission until it was too late and the assignment was given to someone else.

In hindsight, the fear of being found out held me back from admitting I needed a little help. Had I simply asked for assistance right away I would have gotten started, built up momentum and learned some new skills.

Is there a problem or bad habit you’d like to fix but haven’t really admitted yet?  The price may not be as high as you think, and the forceful step forward may be worth its weight in “goals.”