Men of a certain rage 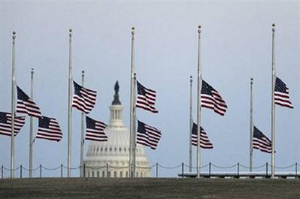 I just watched President Obama’s speech at the memorial service for those who died in the Arizona shooting.  I like that he celebrated the heroes who stepped up to prevent more killing.  I like the way he called out each victim as an individual, and then collectively as a cross-section of America. And I appreciate that he said (in so many words) “Let’s chill out on the hostility, everyone.”

It felt a little weird to me to watch a funeral mixed with pep rally applause and squeals of “We love you!”, but the president is a rock star speaker.  I guess that can’t be avoided, even at a solemn occasion like this.  What gives me hope is that this speech may help those families heal, and may help some think twice before lashing out with blame at those with an opposing point of view.

What makes me sad is that News Theater from BOTH SIDES will most likely be back to business as usual tomorrow, declaring “how many points were scored”… because that’s what they do and sensationalism sells. The blame gets volleyed back and forth like a marathon tennis match and I’m getting tired of it.  Tired enough to just turn it all off.

But there is one thing I really wish I understood – how this obviously psychotic 22-year old man can slip through the system without being helped or locked up.  His rage was right out there in public, and apparently people either looked or ran the other way.  Have we so lost our sense of community that we don’t feel any obligation to really do something when we sense trouble is brewing?

I admit that I have “not gotten involved” in the past, and personally commit to being more vigilant in the future.  Government alone, hospitals alone, individuals alone… can’t stop every one of these deranged powder kegs before they attempt to kill.  So maybe we shouldn’t be operating alone.

As you internalize what just happened, I encourage you to consider this… when you sense someone is reaching out for help or already off the deep end, don’t just let that instinct pass you by and go about your business.  Let’s work together to solve the problem before it explodes.  Law enforcement is made up of hard-working people trying to do their best.  Let’s all do our best as citizens to help them and follow through.

It’s not someone else’s problem.  It’s OUR problem.