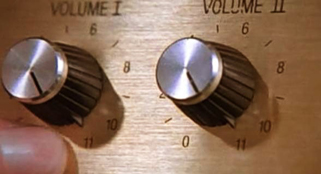 In this famous scene from the mockumentary This Is Spinal Tap, the character Nigel Tufnel is showing off his Marshall guitar amplifiers, and points out that the control knobs all go to setting Eleven. When challenged by the director on why he just doesn’t follow the usual convention of One to Ten, and make Ten louder, he hesitates and responds, “…but these go to Eleven.”

Now many of you may identify with the Rob Reiner character, who clearly has logic and common sense on his side, and you may laugh at Nigel’s blissful ignorance.  I, however, am going to side with Nigel on this one… and agree that eleven is far better than ten.

You’ve surely heard the phrase “perception is reality” and Nigel’s reality allows for amps that go to eleven. When he’s on stage in the heat of the moment and needs to go that little bit more, he cranks the amps to eleven and gets over the top in his performance.  How can you argue with success?

What I like most is the way he ignored the guy trying to tell him differently.  If you listened to every detractor who said you HAD to do something a certain way, you wouldn’t get much done would you?  It’s usually those who break the conventional rules who make the most amazing breakthroughs.

So as we leave behind the last decade and cross over from 2010 to 2011, let this be the year you go to Eleven on your personal goals too.  Let this be the year you trust your instincts.  Listen carefully to advice from experts, but it’s ultimately up to you to define your goals and the way you’re going to get there.

A breakthrough is just around the corner.  Time to turn it up!