You’re in my space 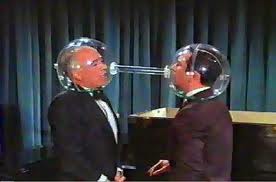 I was first exposed to the concept of personal space in a high school psychology class. The teacher explained how each person carves out an imaginary bubble of protective physical space for themselves when communicating with others, and feels uncomfortable when this space is encroached upon. So just for fun, I tried it out on my friends. Yeah, I was THAT kind of kid in high school.

At lunchtime, I sat down at the usual long white formica table. I placed my food tray and milk on my side of the imaginary line in the middle. I was right across from my friend Steve, who was about to experience my game of Space Invader.

I gradually pushed my tray forward, inch by inch, while we were eating. As soon it crossed the equator, I saw Steve react. It was subtle at first… he kept glancing down at my tray without saying anything. As soon as 20% of my tray was clearly in his territory, he reached out and gave it a little push back toward me.

I had a chuckle to myself but didn’t say anything. Then I tried it again with my milk carton. He was on to me now, threw a French fry at my face and said “Knock it off, Goad!”

I believe the same concept works with personal mind space. We don’t want others encroaching on our brains without permission. You give your attention to messages that you want to tune into, and try to avoid others that have not earned your receptiveness. We are surrounded by so much media from so many; we’re really protecting our sanity by keeping it all at arm’s length. Like Maxwell Smart in the Cone of Silence, we attempt to control who gets in.

Social media is an extension of personal mind space. That’s why marketers get such hostile reactions when they invade someone’s Facebook wall with blatantly commercial messages. Using an app that adds someone’s first name to the beginning of the spam isn’t fooling anybody. In social media space you need to have a real conversation or give an honest gift of knowledge, entertainment or advice to earn your way in to the bubble.

I work in marketing and understand the business drivers behind using quantity and repetition to get to those few people who will respond. But the damage you can do to your reputation is magnified in social media where personal relationships drive who gets to see what. In short, having a real conversation with 3 people per day is better than having a fake conversation with 300.

More than ever, you need to earn your way in and show respect for your audience. Otherwise you’re going to get a french fry to the face.