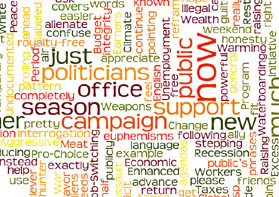 The crisp Autumn air is rolling in and the season has begun… that’s right, election campaign season!  Should I publicly pick a side and alienate exactly half my friends?  No. I’d rather have some fun pointing out how politicians spin the English language.

A clever euphemism can be a powerful ally in a campaign, and can completely reframe a debate in your favor.  For example, it’s much easier to support “Undocumented Workers” than it is “Illegal Aliens.”  Would you rather be labeled “Pro-Abortion” or “Pro-Choice?”  Are you guilty of “Waterboarding” or just following “Enhanced Interrogation Techniques?”

“Global Warming” is now called “Climate Change,” which pretty much covers any weather pattern, doesn’t it?  If you’re a weekend hunter, do you really support “Assault Weapons?”  What if we were raising taxes on the “Highest Earners” instead of “The Rich?”

Here are a few new euphemisms to help you politicians continue to confuse and confound the general public:

If you’re running for office, I hope this helps you.  I appreciate you stepping up to serve, and feel free to use these phrases royalty-free. All I ask in return is that when you get to your new public office, please put the public’s needs ahead of your own while you’re there.  Thank you in advance for your honesty and integrity.