Between a rock and scared face 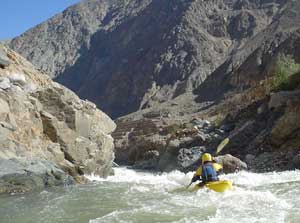 Have you ever been forced to make a hard decision between the lesser of two evils?  Let’s set aside political elections for a moment.  I’m talking about personal decisions you’ve had to make under difficult circumstances, when you had limited options.

We went on a family river rafting trip on the Tuolomne river a few years ago.  We rode a rickety old school bus up a loose gravel road, and were put in the water with a couple hundred other amateurs in inflatable, kayak-shaped rafts with wooden paddles. Each kayak had a carefully packed lunch in a nylon soft-sided cooler leashed in the back.

Our safety instructions included what to do when (not if) you fall in the water.  “Lean back and lift your knees, and let the life jacket carry you.  If your foot dangles too low it could get caught between the rocks and the current will drag you under, and that’s not good.” No kidding.  I looked over at my 13-year old daughter Amanda’s face… she looked brave, but a little concerned.

Most of the day was fun and uneventful, drifting through the serene valley without much effort.  Every 30 minutes or so, we’d enjoy an adrenaline rush from paddling through small rapids, not unlike an amusement park water ride.  Amanda was in the front and I steered the 2-person kayak from the back.  A veteran canoe camper from my youth, I knew the basics of paddling through rough water.  But I had never been through Class 4 rapids before.

Near the end of our trip were the toughest rapids of the entire day.  They had some clever name for it, like Nemo’s Nemesis or River Rat’s Revenge.  We looked up ahead to see kayak after kayak spin through the churning water and capsize its passengers into the river.

I shouted to Amanda, “When I say GO, paddle as hard as and fast as you can on the right side.  I’ll steer from the back!”  As we got sucked closer to the boulders ahead, I could see this was not going to be easy.  I yelled “GO!!” and we paddled hard, but it made no difference.  Our kayak spun clockwise and the stern bumped up against a large rock with a huge splash of ice cold water across my back.  And then… we didn’t move.

I twisted around to see that our lunch cooler had popped out of the back and its nylon rope wrapped around the rock. The water pressure held it, and our kayak, in place like an anchor. The front was pointed downstream and dipping below the surface, allowing a torrent of cold water to rush across Amanda’s outstretched legs.  She turned and looked at me, more than a little concerned.

I reached out with one arm to pull the cooler off the rock, but hundreds of gallons per second prevented me from budging it.  I stood up and stretched one foot out onto the rock, with one still in the boat.  The cooler was still too far around the rock for arm strength alone.  I considered my choices – wait in the boat for help, or do something.  I hadn’t seen our so-called river guides all day, and judging by the increasingly terrified look on my daughter’s face, I needed to do something now.

I stood there for a few moments with my hands on my hips, straddling the rock and the kayak like a statue. I was the “Colossus of Goads.”  I figured if I jumped onto the rock, I could put my back into it and lift the cooler up to free us.  Then I could jump back into the kayak before it took off alone with my daughter through the rapids.

“Dad!  Can you do something?!”  Amanda shocked me from analysis to action.  I hopped onto the rock and lifted the cooler with the superhuman strength of a loving father. I quickly turned to jump like a ninja back into the moving kayak, popping Amanda up like a seesaw.  We landed, accelerated and paddled our way through the rest of the rapids without tipping over.  It wasn’t pretty, but we did it.

The way I like to retell the story, I saved my daughter’s life that day.  The way she tells it, I almost killed her.  Either way, the moment I remember most is the moment of decision.  When faced with danger or survival, most of us are able to decide and act quickly.  When circumstances are not so dire, we can take years to make an important decision.

When you decide to take your next big step – to jump off YOUR rock – there is indeed a possibility that you will get wet.  But standing still is not really going to get you anywhere, is it?  I’ve heard it said that “heroes are regular people who just got cornered… they had no way out.”  Perhaps the real heroes are those who choose to make sacrifices and take action… when they are NOT forced to.