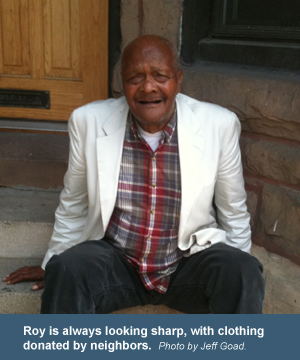 It’s true that clues to someone’s character can be found in the way they treat others.

I wrote a story in August, 2009 about a homeless kid I met on a train.  It seemed like a small thing to me at the time, but it ended up being the most read and passed along blog post of that year.  I was stopped in my tracks by one reader’s response, which really got to me.  This reader’s character is revealed in his comments, and I want to make sure it is not missed.

That was amazing!  Humanity is a very powerful exchange!  Way to go!

As you know, our concentration of homeless and street people in Chicago is huge. I have found myself stopping and just talking to some street folks and you are absolutely right about giving them respect through the simple act of acknowledgement. They have also told me that they feel invisible to most because of the lack of eye contact, let alone conversation.

One man stands out to me. Shortly after moving into our current place in Lincoln Park 11 yrs ago, I met “Roy”. I say hello to “Roy” almost daily, a 79 yr old guy who has no family, and lives at a shelter close by on Clark St. I consider “Roy” to be the unofficial greeter of the Clark and Dickens intersection as he sits on a stoop most mornings across the street from our local Starbucks.

As “Roy” describes it, “I’m a black man who grew up on the South side of Chicago during the ‘Pression, and I done some pretty bad things when I was young. Thankfully, the Lord is colorblind and I’ve been letting him guide me every day since I became a Christian 40 years ago.”

Frequently his eyes will well up when he tells me about his youth and the struggles to overcome challenges in his life. He has lived at this shelter for over 30 years!

It’s evident that he suffers from a variety of issues as he is well bent over. As he shuffles ever so slowly to and from the Clayton house a block away, he lives for small conversations with anyone who will pause. He always greets you with a big smile, a hearty “Hi Babe” and a wave from a sometimes uncomfortably long distance, often half a block away. He’s lost all of his upper teeth and so it takes awhile to get used to his speech and cadence when he is talking to you.

He will tell you, “I’ve lost all my people (family) so I don’t get no visitors, but I do have all of you”, gesturing to me and anyone else who may be walking by.  I made it a point to ask him his birthday several years ago, March 27th, and to give him a card since he has no “people”.

Other neighbors have also begun to do the same. Over time, other neighbors who have seen me talking to him on their way to and from the Starbucks will ask what I talk to him about. I simply answer, “Whatever is on his mind that day.” Frequently it’s about the weather, other times it’s when he is going to get his morning cup of coffee. Other neighbors will buy him a coffee as well, but if he doesn’t have one when I see him, I always offer, or just surprise him with coffee of the day, “no cream, no sugar.”

Even on a cold day in the winter, I make a point to stop, take off my glove as he always does, and shake his hand. I can see his toothless smile grow ever so slightly bigger at the gesture of respect, and the touch of a warm hand. Roy never fails to make me smile and think about what real optimism and humanity means. His faith in people is strong.

I always look for Roy when I pass through the intersection by car or foot. On days that I don’t see him, I will sometimes wonder if something has happened to him, but then I will see him the next day and be relieved that he is still okay, and still greeting everyone who passes by him.

I asked him what he wanted for his birthday this past March, and he said with his big toothless grin, “Already got it when I woke up today, gonna get me another next year, God willing!

I am proud to know Roy. He makes the world a better place!

Yes, this is the same brother Jeff who is now battling Multiple Myeloma.  While the story is about Roy, it also reveals a clue to Jeff’s character and integrity.  I asked him to take this picture of Roy today, and I want to thank him for sharing the story!

If you’d like to donate to finding a cure for MM in our lifetime, please take the 26 or 26 challenge…

Click to donate  $26 to sponsor my Dec. 5 marathon, or send this blog to 26 people.
Together we overcome!  Thank you!!