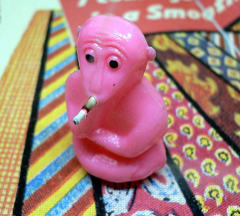 Summertime in the 70’s offered a kid several advantages over kids growing up today. You could ride your bike anywhere you wanted to, stay out all day, and blow stuff up with fireworks.  Oh yeah, they were legal.  Someone’s older brother always had access to cherry bombs, roman candles and bottle rockets, and we would all join in on the fun.  It was worth the blistered thumbs and occasional grassfire. No guts, no glory.

After our moms got wise and banned us from the real fireworks, we were forced into buying lesser incendiary devices that just smoked and sparkled.  Still fun, but no big bang.  They came in a long clear plastic bag: smoke bombs that shot out red and blue smoke; pellets that grew into long winding ashen snake forms when they burned; whistling spinners that whirled around your feet and of course… those sharp little instruments of death… the hand-held sparklers.

At the bottom of each bag was the oddest little dimestore novelty item I had ever seen, the Smoking Monkey.  It came in its own little bag – a cheap plastic monkey in a seated meditation position, and 6 tiny white cigarettes.  We didn’t exactly know what to do with it.  Should we just light him on fire and watch him melt?

My brother read the tiny type on the back of the bag. “Put a cigarette into the monkey’s mouth, light it and blow out the flame, and the monkey will smoke blowing rings like a man. Made-in-Japan.”   Whatever possessed some Japanese dude to create this?  Smoking was still socially acceptable for humans in the 70’s, but probably not for other mammals.

We all gathered around to watch Jeff light the first cigarette.  Yes indeed… tiny little rings of smoke came puffing out of the cigarette while the monkey just sat there on the rock.  There were 5 seconds of silence as we all stared at it, then I just had to bust up laughing… laughing at the absurdity of it all.  Yesterday we were exploding Barbie corvettes with cherry bombs, and today we were reduced to this tiny piece of plastic and paper being passed off as “fireworks.”  Yet here I am today, still telling the story.

My point is this… it doesn’t take a big explosion to be memorable.  There’s something to be said for absurdity and simplicity. I never forgot the smoking monkey because it was so different from all the other “attractions” that day.

Maybe you’ve got an idea that’s really different from what you usually see around you.  Don’t rule it out just yet.  As the simple smoking monkey proved on that hot Indiana summer day… there’s an audience for just about anything.