Toy story with a point 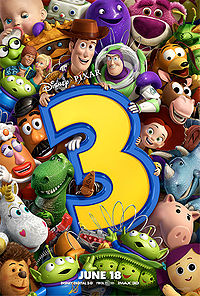 (Spoiler Alert: Scenes and general themes are discussed.)
I don’t care how old you are. Go see Toy Story 3.  My kids were close to the same age as the character Andy in the first Toy Story in 1995.  They are now college age here in 2010, just like Andy in this movie.  The Pixar team must have been fully conscious of this fact when they put together this story, knowing they were targeting both parents and kids.  There are two scenes in Toy Story 3 that touched me the most.

The first is when Andy’s mom walks into her son’s bedroom and sees it all packed up for the first time.  The same thing happened to me when my son went to college.  I walked in and sat on the bed alone. The blank walls and clear floor were a shock to my system, as if all the warmth had been sucked out of the room.  The toys and artifacts had been symbols of a joyful childhood, and represented memories that I didn’t ever want to forget.

The second scene that really got to me was when Andy gave his toys to the young girl.  The movie slowed way down at this point to make sure we had a chance to feel the scene.  Andy didn’t just hand her the box… he sat down and played with her in the sun-speckled grass, celebrating his childhood one final time before moving on to college.

To me, both these scenes are about letting go.  Parents letting go of their kids when they are ready to fly from the nest, and kids letting go of childish things as they become adults.  Both are easier said than done.  Both are required for moving forward.

Thank you Pixar for a great trilogy!