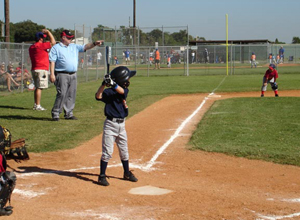 Clearing the bleachers could be a glorious description of a home run ball landing in the San Francisco bay outside AT&T park.  In one of my childhood little league games, it meant something completely different.

It was an important playoff game in the 12 and under division.  Our Farm Bureau Co-op team was up against our bitter rival sponsored by Fout’s Tire.  The game was close and the volunteer umpire was doing his best to call a fair game.  All of our proud parents were assembled in the aluminum bleachers with sunglasses and paper fans to offset the Indiana humidity.

In the 5th inning, the parents got upset about several questionable ball and strike calls and started yelling at the umpire. He ignored them at first, but the yelling escalated into insults and downright hostility.

I was playing third base, which gave me a clear view of the bleachers.  That’s when the ump called a walk for the batter because our pitcher lifted his foot off the pitching mound rubber after starting his wind-up motion.  If you don’t know what that means, it doesn’t really matter.  To the moms and dads in the bleachers, it was like the end of the world.

I had never seen such a display of profanity, fist-pumping and name-calling in my short life.  And it was coming from the alleged role models we were supposed to look up to.  As the mob mentality kicked in, the insults became threats.  I pulled my cap down over my eyes as I nervously tapped my shoe against the dusty third base bag.

That’s when Mr. umpire decided he had had enough.  “You’re ALL outta here!!”  He made a sweeping gesture with his arm and demanded that all parents clear the bleachers before the game would continue.  My fellow teammates and I stood there motionless as our parents made their way out to their cars parked beyond the home run fence, spouting a few obscenities along the way.

I hung my head in shame.  I just wanted to play ball.

Flash forward to today. I was a soccer dad for 13 years and helped coach my son’s team. If you have a child in sports, I truly understand what you go through when your kid is knocked down or gets an unfair call from a referee.  I want to congratulate the majority of you who get your youngsters involved in team sports and cheer them on with positive enthusiasm.  But the next time you find yourself next to one of “those parents” who need a little anger management, why not speak up or clear them from the bleachers yourself?