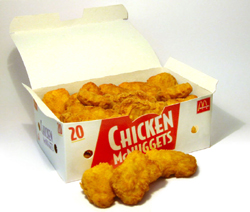 My teenage son was NOT hungry.  That should have been our first warning sign.

He complained about an upset stomach and the usual remedies did not help.  Within an hour he was doubled over in pain and we could not figure out why.

My wife Carol asked him again, “Are you SURE you didn’t eat something strange at school today?”

“Well I was really hungry after swimming and I ate a couple of those leftover chicken nuggets from the car.”

My jaw dropped when I realized what happened.  Just a couple of chicken nuggets that were left in a warm car since yesterday! We immediately headed to the hospital to treat him for food poisoning.

Poor kid… he couldn’t even stand up straight because of the pain, but it really wasn’t his fault. I was guilty for forgetting that takeout box under the front passenger seat.  I grew up being taught not to waste food, and I brought home the leftovers. I was also taught to respect the food temperature danger zone, and this was a gross violation that would land me in food safety jail if there was one.

After 4 hours at the hospital with my son being poked, prodded, pain-killed and x-rayed, the doctor finally bet on food poisoning (as opposed to an appendix rupture or something more sinister.)  And after helping him “expel” the contents of his stomach… he got better.

I felt better too, until I saw the bill a few weeks later.  A big chunk (no pun intended) was covered by insurance, but we racked up $5000 in charges during that 4 hours.  Not that the money is more important than the health of our child, but that’s a pretty hefty tab for eating a bad chicken nugget.

The point is this… it’s not the price, it’s the value.  We all learned a very good lesson that day and things could have been a lot worse.  So the next time you learn an expensive lesson, let it help you not to repeat it.  As Benjamin Franklin said, “Those things that hurt, instruct.”