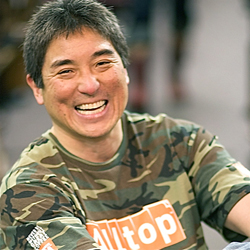 Originally published at Ideas in Motion.

That’s not a typo in the title.  I’m talking about the inane commentary that initially turned me off to Twitter.  Why does anyone care if you blew out a tire and fell off your bike?  Well, if you’re Lance Armstrong, there are lots of people who care.  Some high school daredevil… not so much.  As with most communication channels, you get the bad with the good.  The trick is being able to filter, sort and extract what you want.

I experienced a new taste of Twitter when I moderated a recent WebEx meeting with Guy Kawasaki.  He let loose with a fire hose of facts and advice on how Twitter can be used effectively in marketing, and I fired questions at him from the online audience of over 2000 attendees.

While I was doing my moderator thing, I was also watching the twitterstream we set up #meet@webex. (Hint: Use www.wthashtag.com for an auto-refreshing stream.)  Guy was sharing the desktop from his Mac, and throwing out really cool bits of advice.  I noticed in Twitter how certain phrases caught on with the audience and were instantaneously re-tweeted to trusted networks.

Like an army of reporters typing in time with a drummer, they tweeted

It’s cool to see what others in the audience are thinking in real time.  Guy himself joined the Twitter conversation after the event, sharing more on how to be fascinating.

The point is this… what’s happening with twitter is not inane at all.  I think the focus on foolishness is subsiding, and there are real benefits emerging from this and other social media channels.  You can tap into a rich storehouse of up-to-date knowledge delivered by fascinating people if you know how to find it.

It also dawned on me that a digitally captured conversation or meeting has a lot of value.  Many in the audience were begging for a link to the WebEx recording so they could drink what they missed from the fire hose the first time, as well as share it with their own social networks.  Would you agree that a recorded meeting is a valuable chunk of media that is worth saving, sharing and talking about?

Check out the recording link at www.passtheball.com/events. “Getting Social with Guy Kawasaki.”