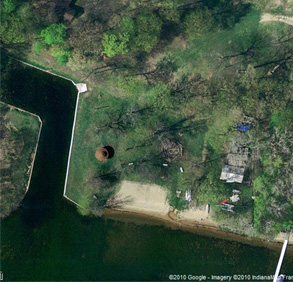 I cast out a heavy lure into the morning ripples of the lake.  Fishing with my dad and brothers has become an annual event, and this time we’re chasing down Muskies in Northern Indiana.  I was all decked out in bright yellow rain gear, like the Gorton’s Fisherman bringing in a deadly catch of frozen fishsticks.  Lake Webster was cold, rainy and unproductive yesterday, so we were out on Lake Tippecanoe to try our luck again.  As I was trying to catch a fish, I managed to catch a glimpse of something else.

It looked just like a summer camp I attended when I was 14 years old – Tippecanoe Church Camp. Then I instantly remembered the sandy beach, the long sloping hill and sprinkling of tall trees.  There was the white mess hall with black window shutters half way up the hill, and the wooden picnic shelter further up.

The flash flood of memories began.  I had never seen the camp from this angle, from the water looking in – but it was unmistakably Camp Tippy.  I was also looking at it from an even broader perspective, that of a man who has lived half a lifetime since attending there with his teenage friends.

I believe everything happens for a reason, and here was a good warm cup of irony.  While I’m trying to lure fish into my boat, God lured me back to the place where I first truly felt his presence.  Some of you reading this right now were there with me.  Some of you were in camps of your own, learning about life and good friends and God during your formative years.

Some of you will click away from this blog now, thinking “uh oh, Goad’s gone off the religious deep end.”  It’s true that I avoid talking about religion and politics (especially at work) because I don’t like being painted with a broad brush or arguing unwinnable arguments.  If you’re not interested in reading any further, skip on to something else and have a happy day.  But if you’re wondering where I first found God, stay with me for a moment.

My most vivid memory was on the final Saturday after a whole week at camp.  It was heavily humid as Indiana summer nights can be.  Over a hundred campers gathered around a gigantic bonfire.  The singing began with beautiful tones rising up through the swirling smoke (harmonies you wouldn’t expect from a bunch of kids)… songs like Amazing Grace, Go Tell it on the Mountain, and For Those Tears I Died.

Think back to one of the most powerful spiritual experiences in your life.  Whatever your religion, did you ever have a moment when you REALLY felt like you were connected to something greater than yourself?  And you couldn’t explain it, and science didn’t support it… yet it was as real to you as your hands clenched in front of your face?

Back to the campfire… we were each given a small white candle in a plastic cup and asked to walk, one at a time, down the long grass hill to the beach.  I was one of the last ones to go, and got chills when I saw the surprise at the end of my walk.  A gigantic cross formed by candles placed carefully in a pre-drawn pattern.  I planted my candle in its sandy spot, and then took my place in the circle of campers who were holding hands and singing “It Only Takes a Spark.”

The lyrics of the song suddenly made real sense to me.

“It only takes a spark, to get a fire going,

and soon all those around, can warm up to its glowing.

That’s how it is with God’s love, once you’ve experienced it,

you want to spread his love around,

you want to pass it on.”

That’s it!  God works through the people around me!  It just takes one person to get it started, and then something spiritual, magical, happens when humans gather to support and love each other. The whole is far greater than the sum of the parts!

The connectedness I felt to God at that moment was indelibly etched into my spirit.  I turned to my closest friend Jeff Bagby and said, “Jeff, we’ve got to tell everyone about this.  I want to pass it on.”

If any of you have wondered why I am usually so positive, helpful and optimistic, and give the benefit of the doubt to anyone who crosses my path, this story might have something to do with that.  I believe we are put here for each other… and I’ve been passing that on since I was 14.

End of flashback.  I’m still standing on a windy fishing boat in the middle of Lake Tippecanoe, and I smile and squint as the sun starts to peak through the clouds.  My fishing line takes off.  I think I’ve got one.