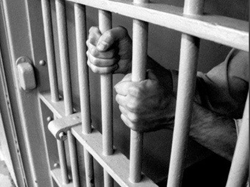 This is the kind of story they tell you not to post on the Internet, for fear that some future employer will discover the real you and pass over your resume.  But I think it’s a humorous story and I actually learned a lesson from it… so why not share?  It still qualifies as funny because I was not charged with a crime, just arrested and toted off to jail with a group of college friends.

What was our alleged crime?  Trespassing.  In a public pool.  After hours.

It was a hot Indiana summer night in the early 80s.  A group of us guys and girls had been dancing at the Beach House, rockin’ down to Electric Avenue, In the Name of Love, because It’s Like That, and That’s the Way It Is.  (Eddie Grant, Thompson Twins, and Run DMC for you youngsters.)

We left at closing time but the party wasn’t over.  Someone suggested the Olympic-sized pool on Salisbury Ave. would be a great way to cool off.  We hopped a fence (that was the trespassing part), shed various items of clothing (the reckless abandon part) and jumped in the pool (the seemingly harmless part.)

At one point I remember swinging from the high dive by my arms yelling wahoooo at the top of my lungs, which in hindsight is probably what alerted the neighbors to call West Lafayette’s finest.  The shock of the cold water was nothing compared to the shock of a high intensity police flashlight suddenly illuminating my nakedness.

They told us to get dressed and I hastily pulled on my splashed wet pants and button-down bowling shirt.  My underwear was too wet and clammy to put on, so I just held it in my hand.  This proved later to prompt a curious look from the lady who checked us in at the jail.  She asked for my valuables – a watch, a wallet, car keys, and yes… the underwear – and she tucked them all into a large manila envelope.

I said, “That might not smell so good when it comes back out.”  She was not amused.  She was just doing her job, and now I was protected from hanging myself with my own underwear for trespassing.

We learned later that the police were not planning to charge us with anything. They just wanted to scare us.  We really hadn’t had much to drink that night, but they put us in a large drunk tank cell, surrounded by a few older guys sleeping it off.  The place smelled not unlike a bar at closing time. The girls were taken away to a cell for females.

After about an hour of playing gin rummy and singing old blues songs (Nobody knoooows the trouble ah seen…), we were surprised by a cart serving hot coffee and doughy Dunkin’ donuts.  Man, they tasted good.

When everything got quiet, I stared up at the window that was sealed with steel bars.  I turned to look at the cell door… more steel.  And it really hit me that I could not come and go as I pleased. I was locked up and my freedom was in someone else’s hands.  This was my “scared straight” moment.

I used my one phone call to call my dad who lived in town, and he wisely decided that we should spend a night in jail before coming home.  He knew the value of the scare tactic.

The next morning they released us and I took the long walk of shame home with my watch, wallet, keys …and underwear… in my hand. Even though I chuckled at the absurdity of the scene, I vowed that I would never do anything to earn another night in that place again.  Freedom cannot truly be appreciated… until it’s taken from you.